Fair Funding for all Schools: Meet the parents fighting a £25m cut to Lambeth school budgets

By 2019, Lambeth schools collectively face losing an estimated £25m from their annual budget through a combination of rising costs and a new formula for how education funding is distributed around the country. In total, schools across England will be approximately £3bn a year worse off by 2020, according to the National Audit Office.

Head teachers and teaching unions say that the unprecedented scale of these cuts will lead to significant reductions in teaching staff, along with increased class sizes, fewer exam subjects and even shorter school opening hours.

In Lambeth, the fifth worst affected local authority – where my eldest son goes to school and my youngest will soon join him – the cuts amount to an average reduction of £743 a year per child. I spoke to Fionna Martin, co-chair of the Fair Funding for all Schools Lambeth campaign, and to parents at schools around the borough, to gauge their reaction and talk about how they’re coming together to fight back and try to stop the cuts…

Fionna Martin is angry – and she’s not alone.

Granton Primary School in Streatham, where her five-year-old daughter is currently in Year 1, stands to lose over £370,000 a year by 2019 if the Government’s proposed National Funding Formula is introduced next year. That’s roughly equivalent to the salaries of eight teachers.

“These are enormous cuts,” Fionna says. “The National Audit Office did some data collection on this and the feedback they got from head teachers was that for most schools  he only way they could deal with this would be reducing staff. That’s going to mean teachers and teaching assistants going – and that’s a terrifying prospect.”

Granton will fare marginally better than the average school in Lambeth. Some secondary schools will lose more than £1m a year – equivalent to 26 teachers’ salaries. Across the borough, schools will lose an estimated £25m a year by 2019. Nationally, that figure is £3bn. If you have children at a state school anywhere in England, you can find out the estimated impact for your school by visiting schoolcuts.org.uk.

Meet the parents: Anthea Eastoe, whose 13-year-old son attends Dunraven Secondary School. Predicted budget reduction by 2019: £1,129,870 – or £892 per pupil
I think parents should be talking to each other, talking to their schools, writing to their MP, talking to their councillors, going out on demos, tweeting, just engaging in the discussion. You don’t have to be a political animal, you don’t have to be partisan. All groups of parents should be involved in the discussion. Some parents might think ‘it’s not for me because I don’t understand the issues’. But if you have a child who goes to a state school then that’s all you need to get involved.

Like all state schools, Granton is already suffering from an approximate 8% cut to its budget in real terms. What that means is that the money it gets from Government has not increased, but its costs have risen significantly.

Changes to the minimum wage, increased National Insurance contributions, pension contributions and the apprenticeship levy – all results of central Government policies – have generated additional costs for schools. These are reasonable policies – but you might reasonably expect Government to increase school budgets to meet the costs it has created. You would be wrong.

While stating that education budgets have been “ring fenced”, all that actually means is that the budget stays the same. Consequently, those budgets are effectively reduced not only by the policies Government itself has introduced, but also by inflation. As the costs of energy, food and other supplies go up, so what each school can afford to buy every year declines.

Schools all over England are already struggling with this – and this is before the National Funding Formula (NFF) is due to take effect next year.

Meet the parents: Helen Scholes, whose daughter and son attend Paxton Primary School. Predicted budget reduction by 2019: £178,550 – or £773 per pupil
For me, like a lot of parents, I think this had just slipped under the radar. Nobody was aware that it was going on, because the Government keeps saying that it’s ring fenced, and I guess I naively believed that. I have seen that there are less resources in schools over the last few years. They’re more aware of what paper they use, things like that. My son, the younger one, has done a lot less arts than my older one, because that takes materials. Looking back, you can see the school has already been trimming its budget. But to think they’ve now got to save another £25m across the borough is horrifying.

“From speaking with the head teacher of my school and parents who’ve had meetings with their heads [the impact of these changes] is kicking in this year,” Fionna says. “Any savings that schools had built up for projects last year are now being spent on their wage bills this year. They’ll be left in a position where they have no financial wiggle room at all. And then the new formula will kick in.”

NFF sounds sensible in principle. The aim is to offer a fairer method of distributing funding to schools around the country. Schools in some parts England, especially in rural areas, have been historically under-funded. NFF sets out to fix this. So far, so good. 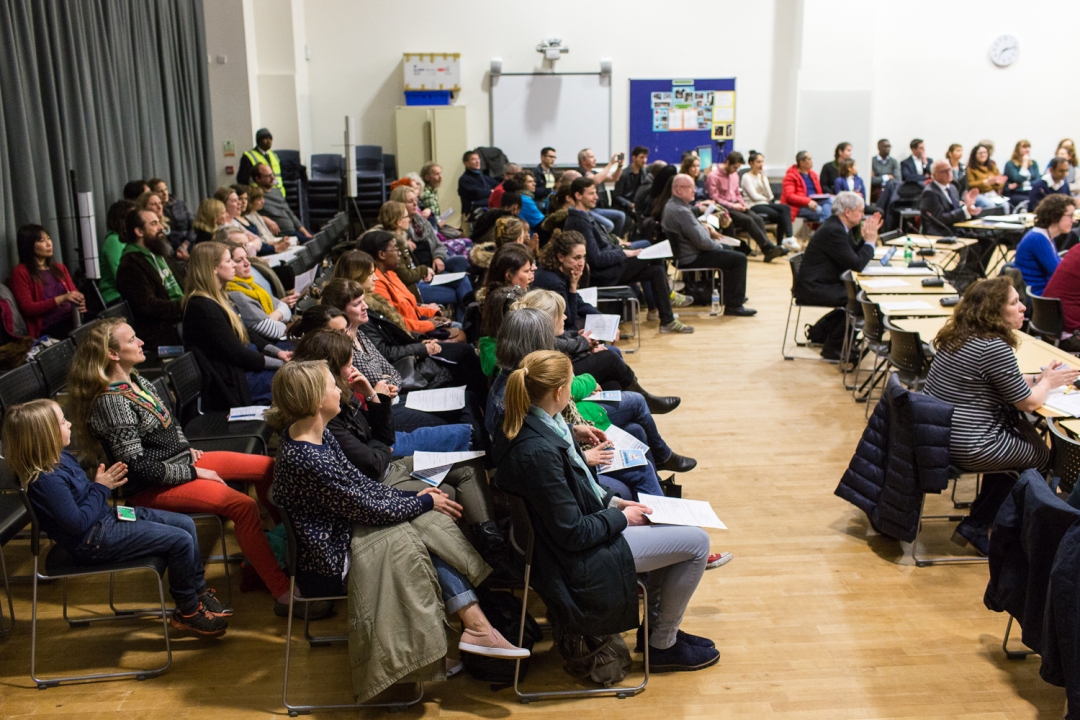 “Robbing Peter to pay Paul just doesn’t work in this situation,” Fionna says. “Peter doesn’t actually have enough to feed Paul, so Paul is still not getting enough and now Peter isn’t either. So instead of having an overall positive effect, it’s having an overall negative effect.”

When Fionna saw the impact the formula would have on Granton and other schools in the borough, she and three other Lambeth mums decided to take action. In January, they set up Fair Funding for All Schools Lambeth – the local arm of a national Fair Funding campaign.

In the space of two months, they’d managed to recruit parent representatives at 20 of the roughly 80 schools in the borough and sent a deputation to a Lambeth Council meeting, along with a small army of parents. Since then, the Council has written to schools, encouraging them to get on board the campaign, and head teachers at many have started sending out letters and emails to parents.

Meet the parents: Desiree Kongerod, whose seven-year-old son attends Crown Lane Primary School. Predicted budget reduction by 2019: £317,508 – or £742 per pupil
My eyes were really opened when one of my neighbours told me that Crown Lane didn’t have a parent representative for the Fair Funding campaign, so I realised I needed to step up! I’d briefly read about [the cuts] before, but hadn’t really taken heed of it. But then I went to see the head teacher about the impact for Crown Lane and he told me that ‘well, we don’t actually know for certain yet, but we do know that we’re going to lose £100,000 for sure for the children’s centre’. That alone equals almost five teaching assistants. I think it’s devastating.

“The second consultation on the formula is open until 22 March,” Fionna says, “so that’s the opportunity for parents and anybody who’s concerned to feed back to Government.” With that deadline in mind, she and the other campaign founders have set up a public meeting on 15 March at Sunnyhill School in Streatham. MPs Chuka Umunna and Helen Hayes, along with Lib Peck, leader of Lambeth Council and Kevin Courtney, General Secretary of the National Union of Teachers, will all be speaking.

Fionna says they need as many Lambeth parents as possible to come to the meeting, to put pressure on MPs and councillors to fight the new formula tooth and nail. But stopping the introduction of the formula alone is not the answer, Fionna says.

“We have no issue with the will to change the funding formula,” she tells me. “Our problem is that the Government has chosen to round down the amount being given to schools, rather than round up.

“We’re very hopeful because this is a non-partisan campaign. This will affect parents of all political stripes all over the country. There may be enough numbers that when it gets back to its next reading in the House of Commons that it will be rejected. But at that point we’d still be left in a position where lots of schools all over the country are inadequately funded. So the Government has to increase the pot of money. That’s what we’re fighting for.”

Meet the parents: Julia Bellis, whose two daughters attend Henry Cavendish Primary School. Predicted budget reduction by 2019: £578,940 – or £723 per pupil
I can’t believe it. I see how fantastic these schools are, and how hard the teachers work. They provide a great education – but they can’t afford to lose these sorts of sums of money. I think it’s so important to invest in education. This is something that we do very well, and it’s very easy to destroy something that’s good. It’s very hard to build it back up again. A lot of effort and investment has gone into making our schools as good as they are. If we lose that, it’s not going to be easy to bring them back.

How you can get involved

3. Join the Fair Funding for All Schools Lambeth Facebook group for updates on what’s happening and how you can help

4. Find out who your parent reps are at your school. If there aren’t any, email fairfundinglambeth@gmail.com for details of how to involve your school

5. Write to your MP and local councillors to put pressure on them to support the Fair Funding campaign

Full disclosure: As I mention in the introduction to this article, this is a policy that directly affects my children. Since learning about the Fair Funding campaign, I am now one of the parent representatives at my son’s school.